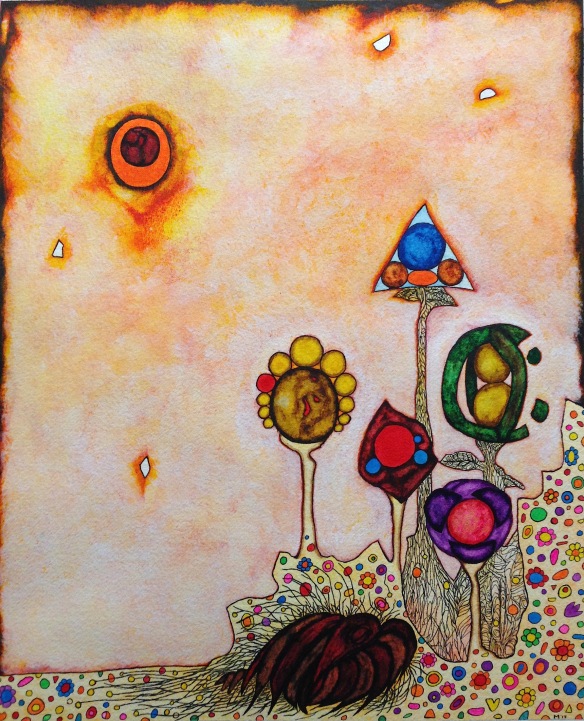 Sometimes, the television really is the world’s best babysitter. I vividly remember being a young child, alone for whatever reason, and stumbling across a late-night airing of an animated psychedelic film. I recall very little from it other than 1.) understanding absolutely none of the spoken dialogue; 2.) being shocked at seeing animated nudity for the very first time, and 3.) being overwhelmed by the incredible imagery — blue humanoid aliens, walking through surreal landscapes of plants and flowers that looked way more sexual than vegetal. It was years later, thanks to the internet, that I learned that the film was La Planète Sauvage (The Fantastic Planet), a 1973 French film by René Laloux. Images from that film haunt me to this day and, upon a recent re-viewing, I’ve begun to realize how much they’ve informed the way I paint.

Halcyon (2017) was commissioned by the Canadian composer Jocelyn Morlock as the cover art for her forthcoming album on Centrediscs Records. Her previous album, the award winning Cobalt, also used one of my paintings, specifically A Garden For Saint Anthony (2011), and I wanted the new image to have some connective tissue with the older one while setting off in new directions. This painting continues an exploration of traditional and popular Japanese art and culture: the large flowers recall the shapes of Shinto and Buddhist sangaku puzzles while the “flower carpet” is reminiscent of the pop artist Takashi Murakami. But Halcyon also (and perhaps for the first time, consciously) pays homage to the 1970s psychedelic art I was exposed to in my childhood: La Planète Sauvage of course, but also more G-rated fare like Sesame Street’s Pinball Number Countdown.

Congratulations to Jocelyn on her forthcoming album! Looking forward to seeing and hearing it.